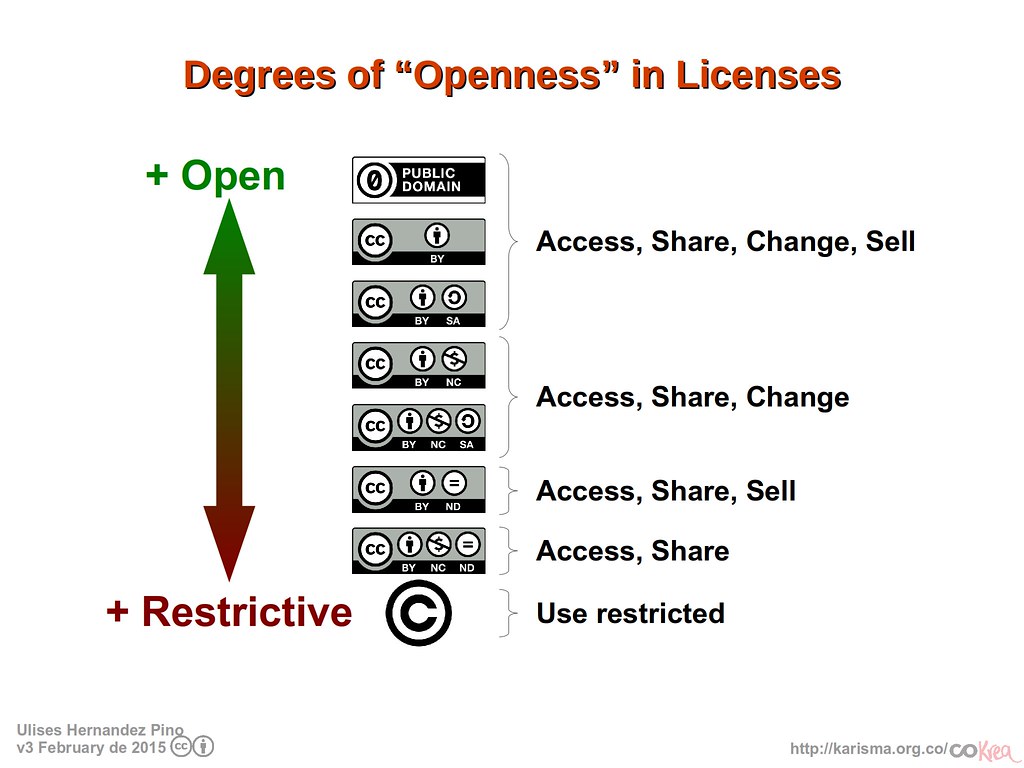 What are your thoughts on what appears to be a course about cMOOC principles being offered as an xMOOC?

I will discuss my thoughts by addressing a few comments made by Jenny Connected...

I don't think George and David have claimed that this is a cMOOC have they... It may be that George and David are simply making use of a ready made platform for structuring their course, in the same way that CCK08 used Moodle, but that the course activity will be distributed across blogs, twitter, Facebook and other social media sites.

This seems to confirm that this course is designed to be some combination of both and xMOOC and a cMOOC, whether explicitly stated or not. I agree that any course offered through edX can potentially be both an xMOOC and a cMOOC, but am a little surprised to see them listed as instructors in an edX course, that's all - no value judgment, just saying.

I don't think cMOOC principles necessarily fully equate with open education... it might be one of the reasons I feel increasingly uneasy about open education.

I am not sure I follow... what MOOC principles fail to align with open education? And which of them causes one to feel "increasingly uneasy"? I'm thinking of the following MOOC principles in particular: meaningful, engaging, measurable, accessible, and scalable (Drake, O'Hare, & Seeman, 2015). I view these five principles as iterative and reciprocal: engagement depends on accessibility, learning analytics depends on scalability, etc.

I agree, but it also does not mean that it is not being offered as an xMOOC. And since edX courses are usually associated with xMOOCs... Again, when I imagine a MOOC being offered by Wiley and Siemens, the last place I think about is edX (or any other LMS). I doubt edX is really needed to market such a course given the following both educators have.

I'm not sure who owns the data that will be generated on the EdX site...

Good point. It's also not apparent who will be generating most of the content and how, when, and where it will be delivered, furthering the ambiguity between where the course will ultimately fall along an xMOOC-cMOOC continuum. For instance, will I gravitate towards the edX platform, elearnspace, or somewhere else? Potentially each with their own content licensing agreeement?  Because the course is being offered in edX, however, it seems possible that some amount of content will remain under edX's own licensing agreement (along with participant interactions?), which I assume differs from the freedoms offered with a Creative Commons license?

I have nothing against an xMOOC nor a cMOOC (or anything in between); both easily can coexist based on the type of course, instructors, and learning preferences of the participants. I can see why offering a MOOC in edX might reach more individuals (than say a private Moodle website) and at the same time, allow those who need it, a certification for having completed the course.

But openness matters in a MOOC. The degree a course remains open influences how participants engage with both content and each other. The technologies that are used, when and where engagement occurs, and types of social (human) interactions that emerge collectively evolve based on how open a course ends up being. A simple example is comparing those seeking a certificate of completion with those who are not. Usually certificates are awarded based on a single set of objectives that may or may not be the same set of objectives one would normally choose if obtaining a certificate were not desirable. Meeting one set of objectives in order to get a credential can influence the technologies used, when and where engagement occurs, and the types of social interactions that are required. Thus, because one seeks certification, the course becomes less open (i.e., contrived). Thus, openness matters to the degree one recognizes personal learning objectives (or outcomes) that were either predetermined or emergent throughout the learning process.

The best kinds of MOOCs are those where participants themselves create most of the content and discussions. Instructors add value when they are able to navigate and curate emerging content so that it is becomes more easily obtained and understood by all. A MOOC can have starting and ending dates, but the resulting interactions and outcomes from the MOOC remain as a digital "footprint" for all to witness - an artifact that could also be contributed to afterwards as well. This degree of openness and the desire to leave something behind can motivate one to participate (to the degree that individual objectives are recognizable), but becomes a challenge anytime a learning management system (LMS) becomes a mandatory part of the learning design - not saying this is the case here with edX.  This leads me to the following question:

Is it possible to receive a credential (credits, certificate, badge, etc.) for having completed a MOOC without using an LMS?

The reality is that some prefer using an LMS while others do not. MOOC designers will need to account for this by determining how open the course could potentially be.

This is what I'll be reflecting on as I take this course: how the degree of openness impacts decision-making processes around licensing, open educational resources (OERs), and learning analytics.

Hi - Thanks for sharing these thoughts and ideas. There are three comments I would like to make in response.

First – the question “What are your thoughts on what appears to be a course about cMOOC principles being offered as an xMOOC?” was yours not mine. :-) I was responding to you. https://jennymackness.wordpress.com/2017/09/11/openedmooc-begins-october-1st/

Second - Apologies for this comment, which I agree is confusing and not fully explained.
“The interesting thing is that I don’t think cMOOC principles necessarily fully equate with open education. ‘Openness’ is only one of the principles of cMOOCs. I hadn’t thought about this before, but it might be one of the reasons I feel increasingly uneasy about open education. I’ll have to think further about that.”
I was thinking specifically about cMOOCs. I would interpret the Drake et al. principles that you mention as being written with xMOOCs in mind. The principles of cMOOCs as we know are autonomy, diversity, openness and connectedness/interactivity. As I mentioned in my post - the important thing about these principles is that they are interdependent. My uneasiness stems from a sense that not only there is little discussion about what might be closed through adoption of ‘open education’ but also that through a focus on just ‘openness’ we are somehow losing sight of the other principles of cMOOCs and the complexity of the whole.

Finally - re the effect of assessment (certificates) on MOOCs. The first MOOC (CCK08) offered assessment for 24 people. I’m not sure whether those 24 (out of 2,200) experienced the MOOC as being ‘less open’, but (as a participant) I didn’t get the sense that CCK08 as a whole experience was less open because of the assessment component. Only George Siemens and Stephen Downes would be able to say how much the assessment influenced the design of the course, but my perception was that it was probably the other way round, i.e. the course design influenced the nature of the assessment.

Thanks Jenny for your response and insight. Final comments…

1) I guess sometimes I enjoy answering my own question, especially when responding to a response…

2) Downes (2009) lists autonomy, diversity, openness, and interactivity/connectedness in a blog post, referring to these four dynamics as being part of a connectivist community (http://halfanhour.blogspot.mx/2009/02/connectivist-dynamics-in-communities.html). You seem to agree, adding that MOOCs are a “testing ground” for this type of theory (I.e., connectivism) (http://www.irrodl.org/index.php/irrodl/article/view/1143/2086).

Here is my point. There is too much overlap in terms of “autonomy” “diversity", “openness", and “interactivity/connectedness” to separate them into distinguishing principles that together set out to describe any one learning theory. For instance, diversity can easily be subsumed into openness and connectedness. We cannot discuss connectedness unless we tease out direction and types of interactions that flow between certain connections, which for me, cover autonomy and other related concepts like prestige, power, cliques, etc… which also relate to interactivity, etc.

But, just because I am not prepared at this time to recognize any particular set of principles that make up a theory called connectivism, does not mean that I do not realize the importance of these four concepts along with a host of others well worth discussing, researching, etc. You make a great point when you conclude that ” learners may vary greatly in their desire for an interpretation of connectivity, autonomy, openness, and diversity” (http://www.irrodl.org/index.php/irrodl/article/view/1143/2086). I totally agree, and feel this is precisely why describing any one type of theory with solely these four particular concepts is premature (although I will continue to keep researching this idea). I find it even a greater stretch to jump from these “four principles” to describe not just any MOOC, but specifically, a cMOOC. If anyone can share peer-review, empirical studies on the topic that are absent of references from blog posts, I am all ears! I admit I have not done an extensive review of the literature on this specific topic.

I know that with my students, some feel uneasy about making their learning (and teaching) transparent (open) because they feel they will reveal mistakes in their arguments or weaknesses in their communicative skills perhaps. But I try to lead by example and show them that the true hindrance to continual professional learning is to disengage or to work in isolation. In our current exchange, I totally expect others to disagree with me and (hopefully) will receive further ideas from others as I continue to think about and discuss these topics via public discourse. You state, Jenny, that you had not thought much about why you feel uneasy about open education, and I am still interested in your perspective once you have given it a bit more thought. I find the topic of engagement and openness intriguing.

3) My final comment is that openness for me is engaging with others and with content in a way that is completely flexible. If assessment criteria are established beforehand (e.g., credit-seeking MOOC learners) then engagement tends to become less open. However, this does not necessarily mean one extreme is inherently better than the other…

You say that course design influences assessment, but am not sure what you mean by “course design". In my view, assessment planning is based on predetermined course (and/or individual) learning objectives but should precede instruction (planning and implementation). Popham (2008) in Classroom Assessment refers to this as “assessment-influenced instruction", Wiggins & McTighe (2005) in Understanding by Design refer to this as “backward design". Even when cMOOC participants are not receiving certification or a badge, they recognize that “assessment” or “evaluation” comes in the form of an exchange based on critical thought and self-actualization.

“There is too much overlap in terms of “autonomy” “diversity”, “openness”, and “interactivity/connectedness” to separate them into distinguishing principles that together set out to describe any one learning theory” - for me these principles are very well separated. And I don’t see diversity as something between openness and connectedness.
Ten years and more I investigated the potential of a gender sensible approach to online learning, and this gender approach over time become broader and has now the name “diversity". Therefore for me the diversity perspective is as independent as the others - and of course there’s overlapping.
Bye, jupidu

Thanks for sharing Jupidu. I would enjoy reading your study.

This is the "Sidebar 2" container. You can place any widget you like in here. In the evo toolbar at the top of this page, select "Collection", then "Widgets…".